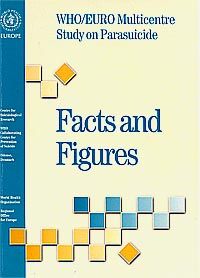 Suicidal patterns are a growing concern and somewhat confusing issue throughout Europe: some countries show increasing suicide and depression figures, others increasing depression and constant or decreasing suicidality, a few others again show a decrease both in the prevalence of depression and the number of suicides. Some countries seem resistant to transition, at least in certain sectors of the population, others are afflicted “in toto”, to a degree where national authorities warn of a risk of “depopulation”.

The complex patterns and background of suicide make multifactorial, process-related thinking highly necessary, even if specific links such as that to depression and/or alcoholism can be identified. Intervention to prevent suicide should consequently take into consideration the complexity as well as the more specific causalities which characterize the suicidal process. What is needed today, is the development of comprehensive, holistic and process-related approaches, as well as practicable, evidence-based and feasible intervention. To exemplify: in addition to improving access to effective recognition and management of depressive conditions, multifactorial and sociological approaches are demanded to intervene in the process of becoming depressed and consequently suicidal, as this process is characterized by an interaction of social, psychological and existential factors against a background of individual biological vulnerability.Thus, the suicidal process can be seen as a typical one, reflecting human processes of development, empowerment, breaking down and reorientation and linked to other stress related morbidity and mortality.

When carrying out collaborative multinational research -or studying results from such research -it is often useful to have at hand some general information on the areas and nations involved in the study and also some general knowledge on relevant conditions in those areas. It is the aim of this publication to provide those interested in the WHO/Euro Multicentre Study on Parasuicide with such information.

The following is based on reports from the individual centres. The first section describes the catchment areas and their most essential demographic data; the second section provides information on social conditions and indicators of social instability; the third section covers more comprehensively health and health care, and the fourth section discusses the data on suicidal behaviour and on treatment of suicidal behaviour in the various areas.